St. Joseph’s College in Dumfries has been handed over following completion of a £24M refurbishment and extension, as part of the first phase of Dumfries and Galloway Council’s “Dumfries Learning Town” initiative. Working on behalf of Graham Construction, CRGP provided full architectural services which saw construction work undertaken to fully remodel and extend the existing School.

Founded in 1875 by the Marist Brothers, the Grade B Listed building was in need of extensive fabric repairs, whilst its two existing extensions, which had been erected in the 1960’s and 1980’s were no longer fit for purpose. The three buildings shared only one common level, on the first floor, meaning that large portions of the School were inaccessible to students, staff and visitors. The existing Gym and Dining Halls were remote meaning that pupils had to endure inclement weather whilst travelling between them.

The project has successfully rationalised the existing buildings to provide a single School building with integrated gym and dining facilities. It was very important for the School that the identity of St. Joseph’s College, which includes its own stand-alone Chapel Building, was retained. The Existing Grade B Listed School building was fully remodelled and refurbished, including fabric repairs, new windows and new roof coverings. The 1960’s extension, which had been re-clad in the 1980’s was stripped back to its concrete frame structure, whilst the 1980’s extension was demolished to allow for the erection of a new health and wellbeing facility, consisting of a 4 court games hall, gym hall, fitness suite and modern home economics teaching spaces.

The total remodelling of the existing buildings allowed a seamless integration of the new build element, enabling full, all-inclusive access to the entire school for the first time in its long history.

The development of St Joseph’s College offered a unique opportunity to create a new and exciting 21st Century educational environment within the context of a Grade B listed setting, allowing both pupils and teachers to thrive in new vibrant internal and external spaces designed to stimulate learning. 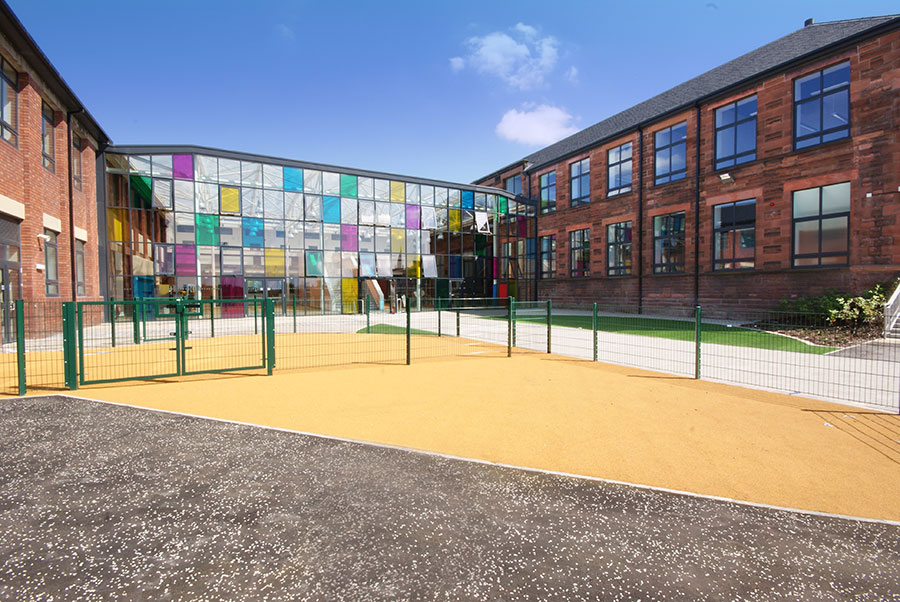